Time again for the girls in the Christmas Card Club to show our next makes. I did have all these made ready to post last night but had to wait until day light to get good pictures. It was Granmargaret's  turn to choose the theme which is Angels or Fairies.
Now I didn't have any Angel dies, stamps or digis to hand or used christmas card fronts. Also didn't want to make fairy cards again so I pulled the ace from out of my sleeve that we decided to use for this yr which is Anything Goes if you can't follow the theme.
Whilst having my massive sort out of my Craft Room  (which took most of January up and it's amazing/shocking  what stash you find hidden) I came across a bundle of unfinished cards from at least 4 yrs ago when 'The Craft Barn' had it's bricks and mortar shop and I used to go to a lot of their craft classes. This particular day was to use one stencil only and as many different mixed media elements as possible to make a card with. We managed to do eight cards each but had no time to finish off each card so we were given the card blanks, design card and envelopes to take home with us and finish off at our leisure. Oh well better late than never. Here are just four of the offending/said cards. 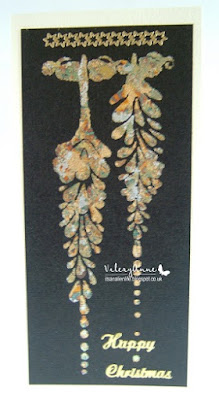 I'm really pushing the boat out here to remember exactly what we used on all of the cards. This first one used the Imagination Crafts 'PS Wisteria  (used on all of them) and gilding flakes glue and Gilding Flakes rubbed over the stencil. I see here though I had the stencil turned the wrong way round. Oops!  Card base is dark brown card stock on a cream card blank. I added the star gold stickers and the sentiment to finnish. 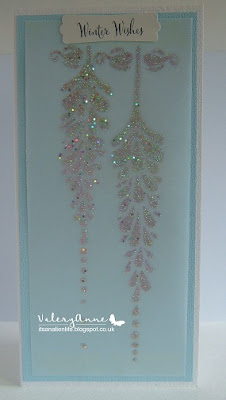 Second card used vellum over pale blue card stock on a white textured card blank. We used White Glitter glue (stencil right way round this time) and then a random sprinkling of Beadazzles whilst still wet.  Winter Wishes sentiment  was part of a set that came free in a craft magazine. Punched out using my SU Extra-Large Modern label. 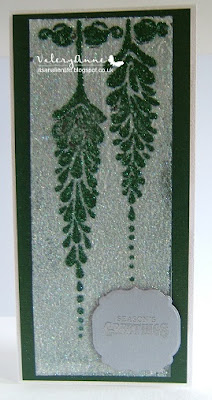 Third card uses Imagination Crafts Sparkle Medium on Acetate. Firstly we coated a panel thinly with white sparkle medium which we left to one side to dry whilst we started on another of the fronts.  Once the panel was dry we laid  the stencil over the top  (sparkle side up and oopsy the stencil is the wrong way again) and spread with green Sparkle Medium.  Base is white card blank  with  emerald green cardstock panel underneath the acetate. The sentiment is a left over from christmas makes and uses a die and sentiment by Tonic on silver card stock raised with 3D pads. (It shows up clearly IRL) 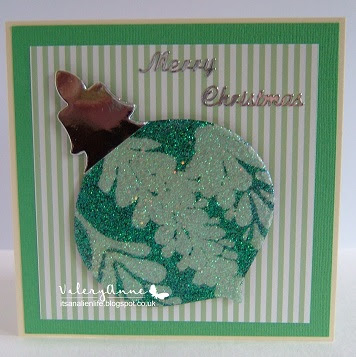 Last card we were given a precut bauble die on thick Kraft  card stock and a matching silver die cut for the hanger. We coated first with Turquoise sparkle medium left to dry and then used just part of the Wisteria stencil to make the design on the bauble using white medium. Again left to dry and then liberally coated in Ultra Thick embossing powder. I do remember that we gave our baubles several coats until the surface was totally smooth so we probably made this one first and went back to it several times during the course of the day.  I simply attached to the front of the card with 3D pads and added the silver sentiment sticker to match.
Here they all are together so another 4 cards to add to my 2018 pile. 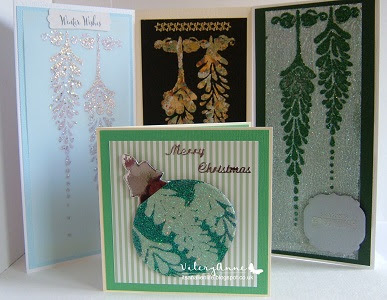 WOW everything from one stencil!!! Super creative!!!
Cheers
Dr Sonia

Hi Mrs A your Christmas cards are gorgeous. That is one well used stencil. Take care. Hugs Jackie

You always come up trumps! I was waiting to see what wonders you'd found in the recycle stash, as angels are usually a good motif on purchased cards. I loved seeing these 'blast from the past' UFO's, and you've turned each effort into something really beautiful. This must have been such a fun class to be in. Love the sparkle on each example, and the blue with the vellum, that sparkling 'icicle' stencil - oh does that look brrr & icy. I especially liked the different colors used in the stenciling, but the ornament was really the big WOW to me. And you've finished each design off just beautifully. Well done! TFS & Hugs.

Hi Valery, my those are so gorgeous! Smiled at the stencil the wrong way round- you'd never know it, and I've done the same thing many times using mine. Makes for a bit of variety, I say. Also smiled at what you find when tidying your craft room! Finding so much stuff that was forgotten about is just like having a huge shopping spree, lol. Hugs, Shaz Xx

Glad you finally got to finish off these beautiful cards after all this time, Mrs A. I dread to think how many different unfinished project I'd find if I tidied my craft room! I know there are quite a few. LOL! xx

Wow! Wonderful cards Valery, so pretty and full of sparkle. So glad you got to finish these and share with us.
Lorraine

Theses are so lovely and sparkly Valery...just loving the bauble..and great to finish your projects...I have to admit to having a few on the go at the same time...xxx

What a great set of card and love all the glitter and the sparkly ear-rings, tad heavy on the old ears though!?
Kidding.. about the ear-rings, not the cards.

They are beautiful, lots of lovely shimmer for Christmas cards.

These are all beautiful, Mrs. A. Each and every one. I can not pick a fave as I like them equally!
It was fun to read how each was done.
I think I have card fronts from classes and sometimes even from my abandoned work at home. I should dig themand and give thema dust off and get them finished too!

This stencil is fabulous and all your cards are glorious. So sparkly and beautiful. The light at this time of year is awful for taking photos - and I'm not the best photographer anyway! Take care. Christine x

It's amazing what you can do with just one design! I like them all!!
Lia xx

So many different looks and textures from one stencil Valery, they are all fantastic.

Great work as always and always love a bit of glitter.

Have a good week.

What pretty cards, loving the bling and those wisteria cards are really extra special x

Hi Mrs A,
what very wonderful card and that stencilled image is so gorgeous.
Love all the wonderful glitz and opulence to these.
The 3rd one with bauble is another reall stunning creation.
I wouldn't mind a bauble like that on mt Christmas Tree.
Lots of crafty love. Jenny L.

Fabulous cards Mrs A they are gorgeous! huggles Sue xx

I love that these finally had their time to shine. You've made a stunning set of cards with them x

What a lovely stencil and your cards look gorgeous. They all look so different. What a good idea to make a bauble for a Christmas card. Barbxx

What a fabulous find Mrs A, these are gorgeous. Carol x

All beautiful cards, lovely stencil you have used.