﻿
It is  a new Theme
over at my Butterfly Challenge
#47 Butterflies + O is for Over the Edge
(so edge cut on project to overhang or the overhang method when cutting a die when the image goes over the edge as on a circle die).
or
#47 Butterflies + U is for Undulating
(so image or embellishment on  either wires or acetate strip so that it moves on the card.)
It 's a double billing as we are down
to the last two letters of the current Alphabet theme.
My Inspiration card is to show you
what I made using acetate to make the movement. 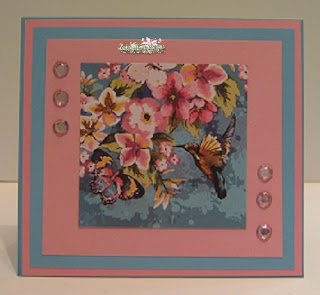 No acetate on the front this time!
The surprise is on the inside. 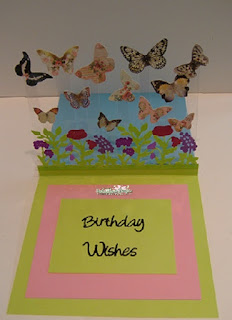 When you open up the card you find
this array of butterflies bobbing around!
They are all attached to separate strips
of acetate which are secured behind
the die cut flower border and  sandwiched
between the front and back fold of the base. 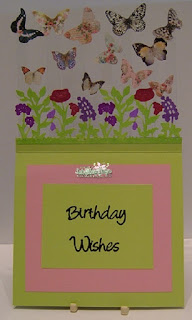 The die cut  flower border
is  Craft Essentials
Meadow border - DIOB0079
which I have coloured with my Graph'it Markers.
The butterflies are all pre cut on a printed sheet
called 'Shabby Chic' by Studiolight.
I used pink, green and blue cardstock for the base card.
Sentiment is a textured sticker from my stash.
Acetate strips were all left over snippets.
Design paper snippet and gems from my stash also.

Next week I will show you a card using wire!

Hope you will play along with the new challenge.
Remember you can use either of the themes to enter.
Jenny has made  a pretty tissue box for the
Over the Edge Theme.

Wow l just love the Acetate on the inside of your card Mrs A which is stunning and the butterflies looks amazing too! xx

Oh how clever Mrs A! I can imagine that those butterflies really do bob around IRL too :)

Oh, now you are testing our creativity with this one, will have to get my thinking cap on. Love your sue of acetate and well done n the photos as it's always a pain to shoot.

Beautiful work Mr's A. You're certainly doing wonders with the acetate these days. The butterflies look lovely flying. Barbxx

Brilliant Mrs A! (I appear to have mislaid some of my followers - hope you're not one of them?!!) x

Oh this is so lovely ! I love the inside with all the butterflies !!!! It's magnificent !
Greetz
Margo

Hi Mrs A,
oh what a lovely surprise inside your gorgeous card.
This is a very fab idea, and very lovely surprise for the recipient.
Great image of the humming bird too.
Lots of crafty love. Jenny L.

Two lovely creations and you are doing some great stuff with the acetate.

Gorgeous card and such a wonderful design ValeryAnne.
Hugs, Veerle

Just beautiful Valery, love the butterflies. Thank you for playing along with our Challenge at Penny's Paper-Crafty. We would love to see you again ... Anet DTx

WOW! What an amazing creation! Brilliant!
Thanks for sharing it over at 2 Creative Chicks!:)

Gorgeous card and I just love the image and use of the acetate, the butterflies look awesome..xx {aNNie}

Great card! What a neat way to decorate the inside! Thanks for joining us at Little Red Wagon.

Wonderful card Valery, I love the design and just think what a surprise the recipient will receive when they open the card, very clever, Kate x

I can imagine the surprised look on the face of the recepient when they open this card. The butterflies are so pretty and I love how you made them pop up.

I like the front very much then you get the wonderful surprise inside. Very inventive.

Hi Valery - just re-followed you again - blogger works in mysterious ways methinks! Must have a little word about your card - I love how you've done this - all those butterflies flitting about in there! Gorgeous. Hugs to you Sue Pxxx

Eye Catching beauty the image is simply fab. Thanks for joining in on the fun over at Aud Sentiment Challenge. We look forward to seeing you again.
Hugs
Berni,DT
audsentimentschallenge.

I absolutely love the way you did the butterflies! Thanks for joining us at Crafty Gals Corner! Jeanie, DT

What an awesome card. Someone will be very happy when they received this card. Love the idea of all those butterflies bobbing around.

Beautiful card. Love the acetate surprise on the inside. Gorgeous!
Thank you for playing along with us at Crafty Gals Corner.
Hugs ~ Lena, DT
Lena’s Creations

A lovely card!
Thank you soo much for taking part in our "celebrations” challenge over at Penny’s.
Hope to see you again in our new challenge as well…

(DT Come and Get It)

Hi ValeryAnne!
I love your card. I saw it over on Creative Card Crew and had to come take a closer peek. I'd love to have you stop by these fun challenges to share your wonderful cards wtih us. I'd sure be honored to have you join us.
Blessings,
Karen Letchworth