Late posting as I have a nasty bout of Cystitis
and have only just climbed down off the walls
for sufficiently long enough to sit at my laptop.
It is time again for another challenge over
at the Christmas Card Club.
This time is was for Christine to set the Theme
which is Winter Wonderland.
My thoughts went straight to silver and blues
and I knew  which papers in my stash
I wanted to use. The snowflakes is actually scraps of
old magazines pages that have been painted over
and then the snowflakes stamped randomly on top.
Not by me though.
I won some stash several years ago
from a German blogger who was de stashing
and these sheets were amongst the goodies I received. I used SU grey card to make the card base.
Then layered up with silver holographic paper
(from Hobby Craft years ago)
and my favourite Navy pearlised  cardstock.
I edged round each  of the blue snow flakes on the paper
with  a white Gelly Roll pen and then dusted over
with Glamour Dust whilst the pen was still wet.
The Reindeer  was a left over from
a Kanban topper sheet called  'Winter Reindeer.
I gave his Antlers/legs the same treatment with
the gelly roll pen and Glamour dust.
Finally I glued blue gems to the antlers
and white to the snowflakes and printed the sentiment
from word. 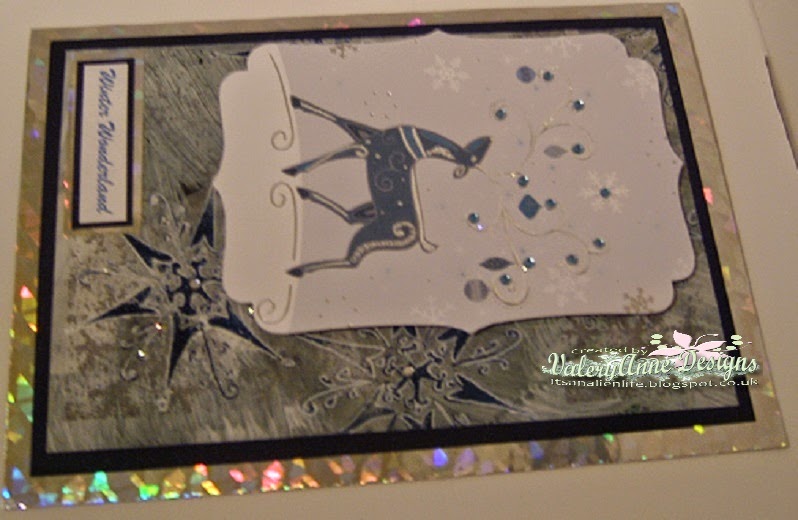 I tried taking a picture with the card flat so you can
see the lovely sparkle from the gems
much better IRL.
I then had the  bright  idea of making another card as I thought
the snowflake paper looked good as a stand alone.
This card took 3 times as long to make as it kept going wrong.
It did start out the same size as the first one! Enough said!! 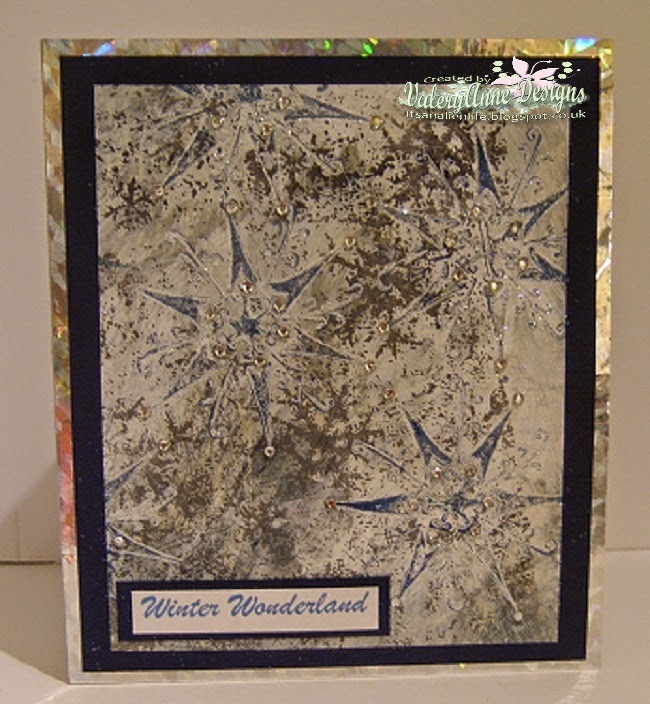 Note to self. Quit when one is ahead!!
I woke up this morning and found I had missed
2 gems off the card and the Doc said I had
sparkly bits all over my nose. 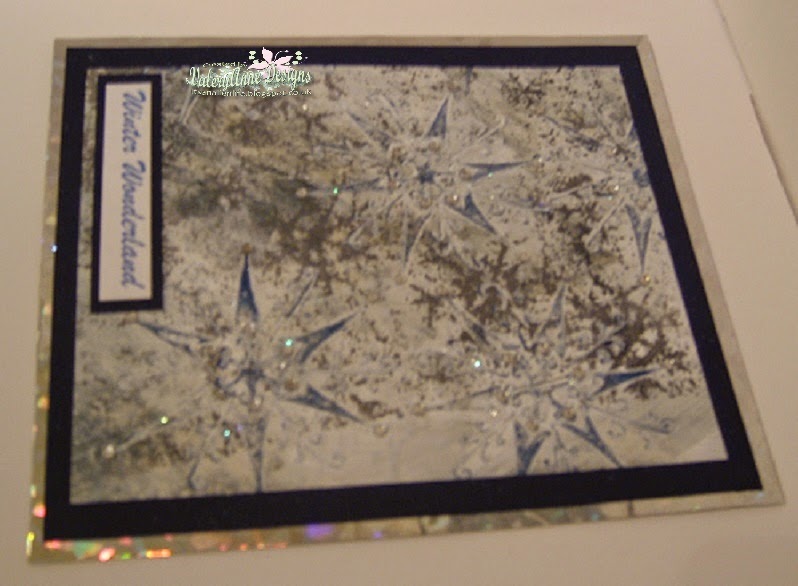 Again I tried taking lying down (the card not me)
though I did feel the need to do so in a dark room afterwards
IRL it really does sparkle .
So does my nose!!!!
As I have used up loads of snippets popping over to Pixie's Crafty Workshop. #143.
P.s Hazel kindly invited me to also link up with her challenge so that's where I am off to now.
Crafty Hazelnuts Extra # Anything Christmas.
﻿
﻿
Posted by Mrs A. at 21:17

Commiserations Mrs A..hope you have plenty of cranberry juice in! Love both your cards, the sparkly background looks fabulous, just like frost on the window panes. Carol x

These are both just stunning, Mrs. A! Your efforts were worth it & I can tell the sparkle is amazing in real life! Hope you're feeling much better now!

The hard work was worth it as they are both stunning Mrs A! I love the backgrounds on both of them - stunning and I would love to know exactly how they were created as I have no confidence to do this sort of thing. I hope you feel much better soon, cystitis is a real nasty b! Karen xx

Love the silver and blue - so suitable for a winter wonderland card for Christine's CCC challenge - you could also enter this into my CHNC challenge extra for September - I'd love to see it there too. x

Sorry to hear that you have been poorly, hope you start to feel better real soon. This is a gorgeous card Valery but holographic and mirri card is notoriously hard to photograph and I think you have done a great job nonetheless.

These are fab and sparkly I love them! Christmas is all about a bit of sparkle :-) very thrifty too!
Oh sorry you're suffering hope it clears up soon I've had that badly a few times in the past - not nice!
Lucy x

LOL! Thanks for the funny Honey!
Great card there. Sounds like you need another holiday!
Hugs
xx

Hi Mrs A,
beautiful card.
The design is wonderful, and that paper is super.
Hope your feeling better soon, not a nice thing to have, I can sympathise with you.
Lots of crafty love. Jenny L.

Poor you, feeling so bad! I hope this clears up real fast, as I know it can be miserable. Your card is so impressive, and I love the shades of navy & gray. The pearlized paper worked wonderfully with this and love this graceful deer. TFS how you used the white pen and the embossing round the flakes. It really was dazzling. TFS & Hugs

Two lovely cards Valery - and what a brilliant win! Those papers are lovely and the stag is great with the added touches.

Hugs to you Sue Pxxx

Thanks for your comment Mrs A. I did use flower soft in the globe but not quite enough I think. It was the first time I had used it to make a shaker card and I wasn't sure how much to put in. Hope you feel better today than yesterday.
Lorraine

Oh Mrs A...Oh how wonderful are your cards they are just so beautiful and perfect in every way xx

Lovely super sparkly cards Mrs A, I love the colour combo.
I hope you are feeling better.
Jean x

Nothing better than a sparkly nose to greet you first thing in the morning! Both cards are gorgeous xx

Wish I was close enough to bring you some lovely organic cranberry juice!

Hope you are feeling A OK soon. Poor wee thing!

Your card is so wonderful and unique. What a neat thing to win...that lady was so creative to use her magazine pages like that.

Your stamped snowflakes are so pretty on that paper and the reindeer just perfect!

I love how you combined all those bits and made a gorgeous card. I hope you feel much better by now. That is miserable. Maybe you should video yourself as you craft. Seeing you covered in sparkle would be fun!

Hi Mrs A
Great card and love that backing paper with the snowflakes.
I feel your pain. Its not a pleasant infection to deal with. Hope you're feeling better.
Ang x

Two lovely results Mrs A - I'm sure they sparkle IRL - in fact it does show when you click on the photos! Super backgrounds and what an elegant reindeer. My guess is that the pearlised navy card might be what we bought once when out together? It is rather swish :)

So delightfully sparkly, Valery. You'v made some fab cards for Christine's challenge. Hope you're feeling better. Gallons of cranberry juice should flush all the nasties away. Take care.
hugs, Asha

Loving the colours here! Hope your lady bits are settling down x