We have a lovely friend who decided to downsize and move in with her daughter. Part of her daughter's house has  been converted into a grannie annex which has now been nick named 'The West Wing' by the rest of the family!  Brenda has settled in and this is the card that I sent which can now be shown. 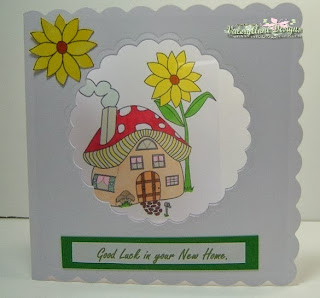 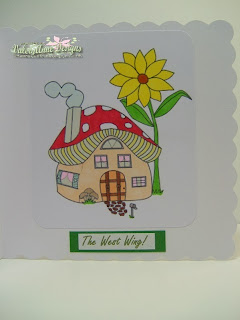 I love that the image is on the inside, and the white space really makes it pop. Great CAS card Mummy xx

What a cute image. I love that your friend is going to live in a house with a name. hee hee

l must of missed this one...its stunning Mrs A just what we need to brighten our day from the dismal weather we are having at the moment and more bad weather forecasted for this week when will it stop hopefully for those who had had it bad won't get it again xx

Great card! Thanks for joining at Heck of a Challenge: New
Hugs
Dewi

Such a fun design. Love the scalloped circle window and the cheerful colouring.
Hugs
Desíre
{Doing Life – my personal blog}

We used to call Mum's annexe the West Wing too! Woe betide anyone who called it a 'granny flat' too... great card and am sure your friend will love it!

Gorgeous!Love the image and your colouring is wonderful. Happy New year, Mrs A x

Really cute design and image on this card! Love the window effect! Love how you personalized this for your friend! Thanks so much for sharing this with Jellypark Friends! Hope to see you again soon! :^)
Hugs, Penny

I love the scallops you used and that is such a cute image. Looks so happy and cozy. Hope your friend loves it as much as her new home.

Love the cute 'West Wing' house peeking through the window. Hope your friend has settled in well. A lovely personalised card. Lynn x

What a sweet card for this very special occasion. I love the name they chose for your friend's new space. How fortunate she is to have a daughter who wants to have her close by. And this cute house is a wonderful way to celebrate this event. Love the image, loved your coloring too. Hugs & TFS --hope you're keeping warm as I expect it's cold in your part of the world too.

Very cute image and a beautiful card, I bet it was much appreciated xx

What a lovely card for your friend.So full of cheer and love the image placed behind the window.Thanks for joining us at Craft Your Passion.Hope to see you again next week :D
Lisa x

Wonderful make for all those challenges, Mrs. A! Everyone knows mushrooms grow best on the west side of the mountain so she will be happy and comfortable in her new adorable home!! Hugs, Darnell

Happy New Year :-)
Thank you for joining in the first challenge of 2014 'NEW' over on The Just For Fun Challenge Blog.

What a really sweet new home card. I love that mushroom with all the home detailing to it. Nice bold colours.

I hope you will be joining us for plenty more of our monthly challenges over on the Just For Fun blog.

Very cute...love how you have the image on the inside of the card.

How cute--I know she loved it!

Love the scallops and the little window!
Cute card Mrs A.

Just posted my first card made with your lovely prize. Thanks again Mrs. A.

This is very cute! Love that little house! Thanks so much for playing along with us over at the Simon Says Stamp Wednesday Challenge!

Such a cute little card,love the image and colours. Thank you for joining in the Just for Fun Challenge, good luck

What an adorable little cottage! Perfect for a new home card!

Pretty card Mrs A and a really clever design. The circular aperture is the perfect frame for this little mushroom house and the flower detail is so pretty :) Donna ♥ x

Terrific new home card Mrs A. I like that you made an aperture! x

Your card is soo cute! Thank you for joining our New Beginnings Challenge at Jellypark Friends!