G is for Gauntlet.

I'm only just in by the skin of my teeth. Didn't realise the time. (I blame the weeds in the garden for keeping me outside.)

The current letter to be used over at the Craft Barn challenge is the letter G. Now as I have used Alien for the beginning of my book and Zip for zipping the book up I could really only choose the one word for G and that is  "Gauntlet". After all that is what The Craft Barn did ,they threw down the gauntlet at the beginning of the year for us to create a page depicting one word for each letter of the alphabet and me not wanting to miss a challenge took up the Gaunlet (so to speak) and so here it is. Just before I do though I want to show you what The Doc found on the floor the other day and gave it to me thinking it was from my Craft Pod. It wasn't but it soon found it's way into my snippets pot. It is a tiny  clip not much more than one eight of an inch long with claws either end. Now that's a buckle in my eyes so it has been waiting for just the right moment to put in an appearance.

Is this the smallest snippet I have ever  utilised I wonder! 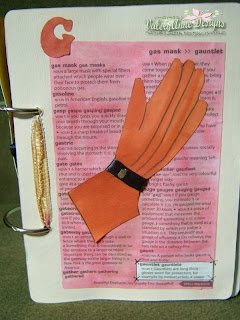 Couldn't find a picture of a gauntlet on the web in the size needed so had to draw one free hand. I'm not much of a hand  at drawing so I'm afraid  this is the best rendering I could do!
Entering into the following challenge:
The Craft Barn : Alpha challenge letter G.
If your looking for the last Frugal Christmas  card one will be along shortly as the competition closes in less than 24hours! tTll then Hugs Mrs A.
﻿
Posted by Mrs A. at 23:00

Checking out the "G" pages now I am back from holiday. Fabulous page, love the gauntlet.

Cool word choice and reasoning for choosing it. Some letters have seemed like an insurmountable challenge but we have all pulled our gauntlets on faced the battle. Very cool depiction.

Pink and orange look great together, don't they! Xx