A new challenge has started  over at the butterfly challenge.  The wheel has landed on a fresh letter.
#168 Spin The Butterfly Wheel with L for Latch Fold Card.
Here is the new format wheel. You now have two choices to play along. 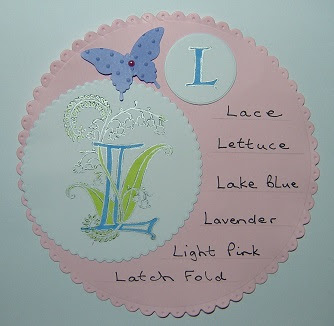 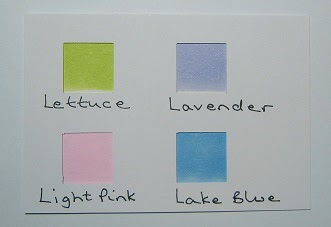 1. Make a card using at least 2 of the colours on the wheel + your butterfly of course.
or
2. Make a card using the Book binding Fold Shape + any 2 of the colours + the Theme + your butterfly of course.
There is a tutorial as normal over on the challenge blog  which you will find on the Card Shapes tab that is under the banner at the top of the page.
This card shape just needs 3  folds so easy peasy to make and there is only one version.
Here are my cards for inspiration.
Card 1.
Uses from the wheel: Latch fold/Lace/Light Pink/Lavender/Butterfly
The image I have used is a page from one of the Hunkydory  Little books of Butterflies which I have trimmed down to fit. The pink design paper is from a paper pad from My Minds Eye Called 'Lost and Found' by Jen allyson  I have uede a 2" punch for the circle and my SU Labels  punch. Sentiment is silver sticker from my stash along with the pink lace that I have attached to the inside of the card. 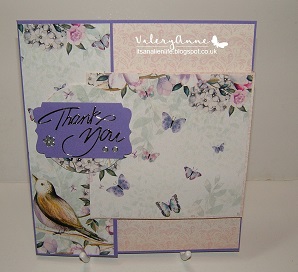 Inside of front flap showing the lace attached. 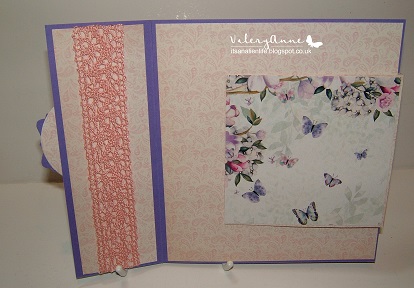 Entering into the following challenges:
Crafting Happiness #121 anything goes.
Everybody Art #509 B is for.......   (Bird, Butterfly).
Ally's Angels #56 Anything goes.
Love To Craft #67 Anything goes.
The Creative  Crafters #50 Anything goes.
Card 2.
Uses from the wheel: Latch fold/Lace/Light Pink/Lake Blue/Butterfly
The large butterfly is by Prima Marketing and comes in an assorted packet of six. Design paper is by Nitwits from their Lavender Collection 'Fleur teal'. The sentiment is one of my favorite go to's by Kaisercraft from their 'Birthday Wishes' collection. Lace edging found in my stash. 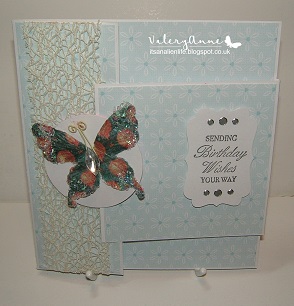 Entering into the following challenges:
Shopping Our Stash #466 Spread Your Wings
Through The Craft room Door # Anything goes.
A Perfect Time To Craft #3 Anything goes.
Love To Scrap #154 Anything goes.
Mix It Up #58 Anything goes + optional fancy fold.
Card 3.
Uses from the wheel: Latch fold/Lace/Light Pink/Lettuce/Butterfly
the large pink design cardstock id from The Works. and the tiny green and pink sprig paper is called 'Parisian Dreams' by Jenny Ellory 2013. Sentiment is again by Kaisercraft. 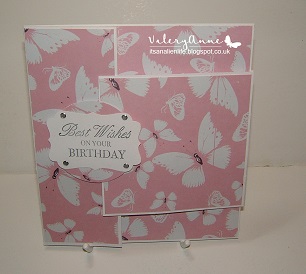 Showing inside of front panel. 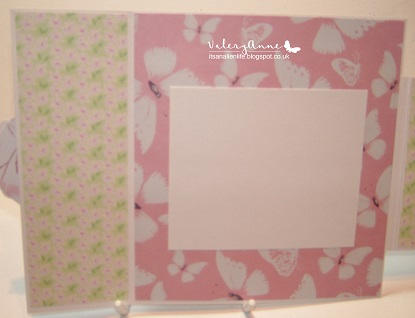 Entering into the following challenges:
Lil Patch Of Crafty Friends #177 Anything goes.
Classic Design Challenge #3 Anything goes.
Creations In Pink #44 Anything goes.
Cutie Pie Challenge #169 Beginning with B    (Butterflies)
I hope you will come along and join in the challenge which is running for 3 weeks so plenty of time to make those few folds.
Fun and games this week with online deliveries which I why i am running a day late for this challenge.
Since covid took over our lives if I haven't been able to buy items on line and get delivered we have gone without. This has worked well over the last 2 yrs until now.
I needed two new pillows for myself as I haven't been sleeping well with the old ones so I found what I needed on line from a large well known department store and ordered them. Order accepted and a matter of a few days later I was informed of the despatch and delivery details which should have been on Monday. We had  been given a 1 hr time slot with The Doc hovering outside the front in order to take delivery but nothing arrived. What did arrive though on my ipad was an email from the delivery company telling me that my items had been delivered within the allocated time slot and that they had been signed for by us (stating our surname) and a picture taken of said parcels left outside my front door as proof of delivery.Not my front door or that of my immediate neighbours I might add and most certainly not signed for by us!! The Doc initially thought that the email had been sent in error and that the  pillows were still in transit.  Roll on a couple of hours later  when a lady whom I did not recognise  turned up on our doorstep saying that she had our pillows left  at her house on her doorstep which she found when she arrived home. They had not been signed for and she lived in a house that was 54 numbers away from ours so not even near us. If she had not very kindly taken the time to come and let me know we  would have had no idea what had happened to them.  Cue an onslaught of emails from me to A. The delivery company and B. the Department store and the reason I am running late.
Watch this space for next enthralling installment.
Stay safe and well
❤❤❤

All beautiful cards and love the fold and pink butterfly P.paper, might even get to join in this one! I must say we have no trouble with our deliveries and the local Hermes man is brilliant and so reliable, he even brings all the neighbours parcels here as most are at work,but seeing everyones comments I think we must be lucky but there is no excuse really when the addresses are plain to see and saying it was signed for too!!!
Carol x

Hi Mrs A your cards are gorgeous. Sorry you are having delivery issues. Take care. Hugs Jackie

Same here with on line deliveries and if not we've gone without Mrs A. Since lockdown I am hearing more and more of these stories about delivery drivers. I do think it is unacceptable and shoddy. I also think when it was full lockdown they assumed everyone was in, left the parcel and of course no one could sign for it and I think that has continued. I have found parcels left in full view for us and neighbours and I am sorry to hear about your delivery woes....Rant over....I think your fold cards look amazing and are absolutely beautiful x.

Three great cards with more fun folds and lovely papers. How kind of that lady to bring your pillows to your home. I would be concerned that the delivery company said someone signed for the order.

Your cards are beautiful, like the papers and fold you used. Thank goodness your pillows got delivered to an honest person.

Another beautiful fold Mrs A and I love the colours for this challenge - so pretty! Lovely set of inspiration cards.
Oh, I just love online deliveries....I like to listen for the crashes as they throw open my porch door and chuck the parcel inside...the only time delivery guys ring the bell is when it's a parcel for a neighbour (which it often is)...we seem to be the collection point for our road...xx

Three fabulous cards and love the new palette, so fresh and sweet.
That lady has been surely very kind, lucky you to have your pillow safe! Delivery are a problem also in Italy sometime.
Hugs

Your cards are absolutely gorgeous Valery, it's a lovely fold and your selection of papers and butterflies are just beautiful.
Sorry to hear that you've had that bother, but thank goodness the lady took the time to find you. hope the new pillows do the trick and you get some decent sleep, take care, Kate x

Your cards are beautiful, Mrs A. This is a new fold to me and I’m looking forward to giving it a try.
Sorry to hear you’ve had problems with the delivery of your pillows. Thank goodness for the kind neighbour who delivered the parcel to the correct address. Our Hermes driver regularly leaves parcels at the wrong address and states that the parcel was signed for. Sometimes they leave it at the correct address, but don’t bother to knock and dump it on the doorstep in full view of the road. 🙄 xx

Your cards are stunning Mrs A. Love all the designs and colours. What a shame, with having to rely on lovely neighbours to get your order!! Big hugs, Carol S.xxx

3 Beautiful cards Mrs A.
Love the folds and the lovely papers.

Hello,
What a beautiful range of cards.
Thank you for sharing your card crafting skills with us at the ATG challenge for Through the Craft Room Door. TTCRD.blogspot.com
I look forward to seeing many more of your challenges.
With kind regards
Sue TTCRD DT
Blogspot handmadecardsbysb:wordpress.com

Beautiful elegant card and a really stunning vintage paper with the butterflies and the bird! I love the purple tone of colour and I love the fold. It´s so amazing.
Thanks a lot for entering the EAC challenge.
Hugs Uschi

Beautiful butterfly cards!! Thanks for shopping your stash and playing along with our "spread you wings" challenge over at SOS!!

Beautiful projects. Thank you for sharing with us over here at The Creative Crafters Challenge and best of luck with your entry.
Wendy DT Member for https://creativecrafterschallenge.blogspot.com/

Cute cards. Thank you for entering our Anything Goes Challenge at Through The Craft Room Door this week. Looking forward to see you again next challenge.
Regards
Danka
TTCRD
Twórcze pasje Danki {My Blog}