Nearly through January already and it is time fo the girls in the Christmas Card Club to show our next makes. Christine chose the theme of True Meaning of Christmas. I received this card last year and as it was too good to just throwaway I decided to reuse here. 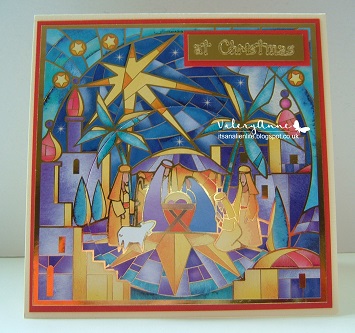 I didn't want to change the card too much just give it a new leash of life so I trimmed the card front down and attached to red card stock and then onto a cream cardstock base. Before attaching though I cut a  large circle from the card around the figures and manager and then popped up on 3d stickers. It gives a nice dimension which you can just see in the sideways photo below.

Beautiful recycled card, the popped circle looks great! I have a lot of commercial card in a large box to reuse, before or later I will get them out and have a go.
Hugs

What a lovely image and so beautifully upcycled to make a brand new card Mrs A.
Lorraine

Hi Mrs A this is a gorgeous card. No wonder you didn't want to throw it away. Take care. Hugs Jackie

Hi Mrs A, what have you recycled this Christmas picture beautiful!
Lots of love xx

A clever way to recycle a beautiful image- love the added dimension. We should all recycle more.
xx

You're right it is a super image and very colourful, well done for recycling and giving it a new life. Happy new year Zoe x

A beautiful card Mrs A. What a great idea, cutting a circle to give it some dimension.
Hope you are doing a bit of needle felting, for your Hare. How are you breaking your needles? I am lucky and not broken a needle yet, but have stabbed myself a few times!
Stay safe, hugs, Carol S.xxx

This is so beautiful, great idea to give it new life on a handmade card!

A beautiful card, I love the bright and colourful scene.
Pauline - Crafting with Cotnob
x

Great idea to cut the circle and add some dimension and a stunning card. Glad you re-cycled it x.

Hi Valery, it's a great piece of upcycling, I love the card, you are quite right too lovely to be binned. A brilliant idea to cut the circle and raise it, well done, Kate x

A most gorgeously designed card, beautiful colours and texture. x

Such a beautiful card Valery Anne, far to good to discard you've recycled it perfectly.

Hi Mrs A,
I agree that scene was too wonderful to throw away.
Love your idea od decoupaging the circle cut into the design it gives it such depth and the wonderful backing matts set it all off perfectly.
Lots of crafty love. Jenny L.

It's a lovely card, no wonder you didn't want to throw it away. A good piece of recycling here.
Avril xx

This is so beautiful and a great save to repurpose a card and make it your own! It's always nice to see the real meaning of Christmas on cards too!

Apologies for being so late, Mrs A. Your card is beautiful. Like you say, the image was just too lovely to throw away. And I like the clever treatment with the circle. Elizabeth x

I love all the colors and how you popped up the focal point. It looks great.