Both of our Grandsons have their Birthdays in December. One at the beginning and one at the end and these are this years cards for them. How did they get to be 13 yrs and 14yrs so soon!
Card for  Grandson No 2. 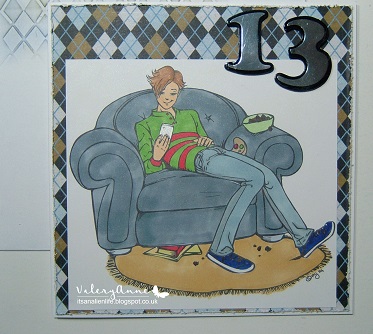 Image is by Mo's Digital Paper called ' Noah' coloured with my Graph'it pens and given a light dusting afterwards with Pearlescent chalk.  The design paper is called Stars and Stripes from the Nancy Watt collection  a freebie from Making cards Magazine.  I found an embossing folder in my stash,  and as I am making it my mission to actually use my folders I decorated the handmade envelope with it. Called 'Argle' by Sizzix. I  coloured in using a selection of distress inks to match the design paper. 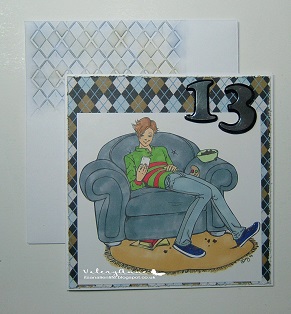 Card for  Grandson No 1. 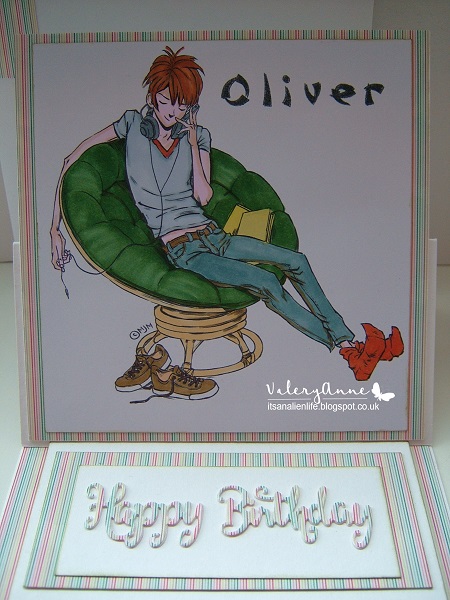 I don't have a name/who by for this paper other than it was a freebie from a  magazine a long time ago. The image is Aiden by Mo's digital Pencil.  I coloured the image first and then found the paper in my stash so a stroke of luck that it goes so well. Used my graph'it pens as before and made into an easel card. The name is using an alphabet set by Woodware called 'Oriental Style' . The sentiment is a die cut by Creative Expressions and layered up with two layers of plain card and then the top layer cut from the design paper.  I used every bit of the A4 paper up and the last little scrap that was left I put on the envelope which you can see behind the card below. I am not allowed to say he has red hair but he has as does his sister.! 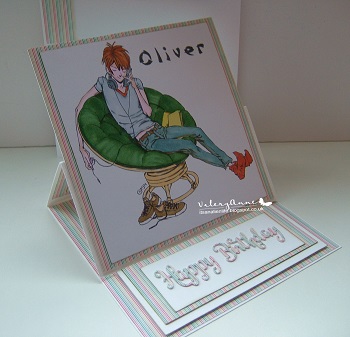 I had my flu jab yesterday morning  which floored me for 24hrs but I feel ok now. The nurse wanted to give me a Tetanus and a Pneumonia jab at the same time but that was going a tad too far for me so I have those to look forward to in the New Year.
Stay safe and well
for Christmas.

What perfect images for teenage boys. Fabulous personalisation and love the extra touch on the envelope....They will love these Mrs A.
Sorry to hear about the flu jab and I am with you about one injection at a time. I had my booster and flu jab separately too x. Not heard about being offered a Tetanus and Pneumonia jab too?

These are wonderful cards for teens now days. They are on their phones or have their ear buds in all the time. They are fun cards and perfect for boys. I'm glad your flu shot wasn't too bad and I think you are wise not to get them all at the same time.

Bound to be received well by the two boys Mrs A! Great cards
Had my booster today - starting to feel like I've been run over by a bus! x

What brilliant cards for teen boys Valery, the images are fabulous and I love your designs and colours.
Glad to hear that your jab didn't floor you too badly, keep safe, Kate x

Hi your cards are fabulous. Your grandsons will love them. Take care. Hugs Jackie

Those images are perfect for teenagers, lovely cards, I am sure they will love
them

Wow Mrs A both your cards are fabulous the images are great for teenagers and the colourings is stunning l like that they are both lounging around in their own space great layouts too......yes l agree a tag too many jabs in one day leave then until the new year glad your better now after suffering for 24hrs take care stay safe xx

These are perfect cards for your teen grandsons! It's great that they celebrate their birthdays relatively close, but each card is different and unique! Great designs and fun cards too!

These are fantastic cards, perfect image for teenage boys. Beautifully colored and designed!

These are perfect images for lads of this age and your two cards look great.

Absolutely perfect cards for teenage boys. My eldest grandson was 14 last month, it seems only yesterday that he was a baby! Mind you I say that about my 49year old as well!

Two fantastic cards Valery Anne, i'm sure that your grandsons loved them.

Awesome cards, Mrs. A! These are great images for teenage boys, and beautifully coloured! I think they will love them! Sorry about your flu jab - I hope those jabs in the new year will not be so bad. They were trying to give you too many at once so I think you made a wise choice to delay the other ones.

Two wonderful cards Mrs. A, perfect for your teenage grandsons. I think cards for teenage boys are the most difficult to make.
Glad you didn't feel unwell for too long following your flu jab. Sounds like it was a good decision to delay your other jabs. xx

Perfect images and beautiful colouring. Glad you are ok now after the jab, perhaps the others won't be so bad... I was floored by my booster but at least I've had it. Have a good week. x

I love it. Merry Christmas.
www.rsrue.blogspot.com

These are both great cards and just right for the recipients. We noticed the green bowl x

Two brilliant teen cards ValeryAnne! Perfect for your grandsons. I use those images regularly and love them. Sorry to hear you had symptoms after your flu jab. I have been lucky this year with no symptoms after any of the jabs and so far covid free! Stay safe and have a lovely Christmas.

What fabulous cards for your grandsons! Love your coloring of those fun images! Glad you didn't feel bad for long after your flu shot. Happy Holidays!

Those are both super cards for teenagers, love them

Amazing images, just perfect for your grandsons and so beautifully coloured! Great designs too and love the embossed matching envelope of the firts one.
Hugs and Merry Christmas!