Time again for the girls in the Christmas Card Club to show our next makes. Christine chose the theme of A Christmas Carol.
My card is a bit of a remake. I originally made a card from an old used christmas card a few years ago, but you know when you make a card and it just doesn't gel for some unknown reason? Well that is what happened with the card I made so I undid it and put the parts into my remake stash box where they have stayed ever since. I decided to have another go with the image and make it into an easel card as I haven't done one in a while. 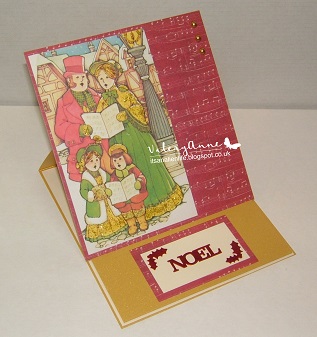 The music design paper must be a christmas tune as it is from a paper pad by Hot Off The Press called Forever Christmas. I have used bright gold glitter card for the cardbase to match the yellow in the image. The Lamp post and the trimmings on the carol singers have been given a light covering of gold glitter glue to give a bit of sparkle. The gems and the red stickers were from my stash. I like it much better now as an easel card.

Our friend is still in hospital because of two things. He has an infection in his bowel which the doctors are trying to clear up and also the care package which should have been in place for him  at home has not materialised. When Brian thought he was being released last week he gave the company a ring to make sure it was all in order only to be told they had pulled out as he needed more care than they were able to provide. They hadn't even bothered to inform the hospital so it is back to square one with organizing another package for him.  It is his Birthday today so not exactly how he would have planned spending it.

Storm Dennis has been raging all day. We lost a tree in the front garden  last weekend from  Storm Ciara and now we have had a small tree in the back garden sheered off at the base leaving just a foot of trunk sticking out of the ground. I am running out of trees!! Hope you are all staying safe and not getting too much damage from the wind and rain.


NB.
Photos taken this morning of the flood pond that runs beside our house. They closed the sluice gates off last night to prevent the rest of the village from flooding. 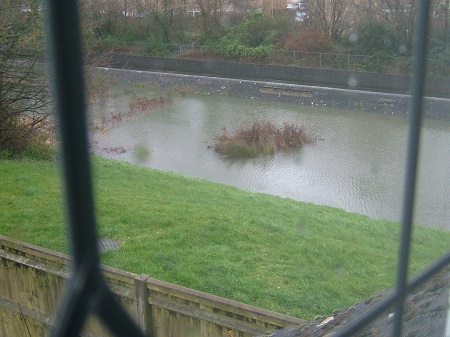 Taken from my craft room  window.  The other side of the black brick wall  and between the railings is where the stream normally runs through the village.  This should all be a grass filled  ditch. now we have an island forming. 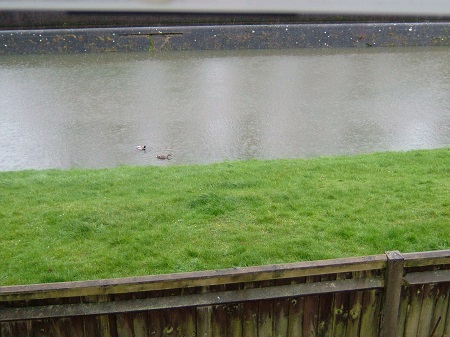 We even have a pair of ducks!

A beautiful card Valery Anne, such a pretty image that you rescued. Sorry to hear about your trees, so far we're fine here. Although a week and a half ago we had a new drive laid, in last weekends storm it flooded with none of the water making it to the drains put in. This week they have been back and relaid it and the good news is no more water sitting there and going nowhere. Sorry to hear that you friend is having trouble with carers, with an elderly parent each Hubby and I know just what you mean about them not being bothered.

So adorable as always are your cards Mrs A l love the easel cards and the image is gorgeous ...l feel for your friend these packages that are to be put in place are a nightmare my sister who l lost over Christmas was sent home without be package too hopefully all will put in place but the time wasted is so annoying ...storm Dennis here too had a really windy and wet night l am hoping the worse is over as l am on a corner and it seems to gather more from both directions and to lose trees is upsetting l love trees hopefully no more brought down and roll on spring hope your well too take care x

Storm Dennis is still blowing this morning (although not as bad as last night)- I have a big rhododendron in a large pot and DH is fed up trying to lodge it upright for the last two weeks.
Poor Brian - hope they get things in place for him soon.
Great card recycling! x

Hi Mrs A your Christmas card is gorgeous. I am so sorry to hear about your friend. Care is not easy to sort out. We have lost a panel from our conservatory roof. Everything is wet. Hubby and neighbour are trying to sort it out. It will need a proper repair. Take care. Hugs Jackie

Hi ValeryAnne......that’s a lovely image and how perfect on the music background....great card...
The storm hit us during the night and we have a lake in the back garden..the birds are loving it...xxx

A super easel card for our theme this time Val.
Sorry to hear about your storm damage, hope it's clearing away now.
Lorraine

A great card for this challenge Mrs A. So glad yo were able to rescue it. Ciaira took down a couple of our trees but so far Dennis, although raging, has not managed that yet. Fingers crossed now. Christine xx

Your easel card is a vintage beauty and what a great way to re-purpose those Christmas cards that are too pretty to throw away! It's sad how your friend was treated with his medical care - it just breaks your heart to see the anguish folks go through in being cared for properly. I do hope things get sorted out soon for him. So sorry about the loss of your trees in the storms but new ones can be replanted. I'm just glad none fell on your house!

Very beautiful easel card, glad to see that the recycled image has found a perfect place to be! Love the music paper, it's just perfect to match it. The gold glittered paper makes the easel really gorgeous!
I'm sorry for your friend at hospital, for your trees and for the storms. Such bad time!

This is super, whats great card, its a real nostalgic one. Gings you seem to have the storms very badly. Its more wind than rain here today. Freezing cold though!! Hope that your garden doesn't get any more battering, Hazel xx

It's a great card Mrs A, would have been a shame not to use this festive image.
Sounds like the storm has hit your area quite badly, very windy here, but nowhere near what we were expecting.
Stay safe.
Avril xx

Great easel card and vintage image love the embossed music score.I may be speaking too soon but all we had was heavy rain last night and this morning!Sorry ro hear about your friend care packages are a nightmare to sort
Carol x

Aren't you glad you saved this? It made a lovely card. The music theme paper is just perfect for them singing. My goodness, you've had your share of wind and water. I hope things are back to normal now but great crafting weather.

I think it is fun to re-cycle old Christmas cards...I have a box full of them that my sister gives me every time she visits me...
So sorry to hear what your friend is going through....tough time for him.
Please take care weathering that storm...stay safe.

a gorgeous card Valery - and wow - that's a lot of water! We had it not too bad this time - wondering what storm Ellen is going to be like next weekend! Fingers crossed. Stay safe xx

Great easel card and a lovely 'Old Fashioned' image, love the musical papers, they go so well with the image.
You are probably now saying "that's why I picked them, idiot"
Good job our friend is not around as I am sur he would be going for a swim.

Lovely easel card, Mrs A. Great upcycling of a recycled card too!
I hope you don't get any more rain, looks like your part of the country have had more than their fair share!! We've been quite lucky here. Fairly windy, but not too much rain. xx

wow your flooding is as bad as ours, we have ducks too so they love it as does the garden. Stay safe...
Love your easel card.xx

Fabulous card Mrs A, such a great bit of upcycling and remaking. Looks like the ducks are enjoying the weather even if no-one else is xx

What a great Christmas easel card, Mrs A! How satisfying to be able to re-use that lovely old-fashioned image at last! I hope the floods are receding now - what a shame about your two trees, it must be upsetting to look out and see gaps where they once flourished. Let's hope we've seen the last of the bad storms.

Hi Valery Anne, the 'new' version of the card came out great. Sometimes we just have to accept somethings not working for now, and put it aside. The Easel design was perfect for it. Sorry to hear about your friend, how awful of that company. Does make you wonder how well they'd have provided care, I think. That is a lot of flooding, I do hope it starts to drain soon. So sorry I'm running late this week, family stuff got in the way! Hugs, Shaz X

Wow, Mrs. A, I had no idea the storm was so bad in your area! Those pictures are wild! I hope you don't have any more damage on your property! So sorry that your friend is having more problems. I hope they get his care sorted so he can go home soon - I think people heal quicker at home. Your Christmas easel card is beautiful and I love the music theme!

I love your card Valery, you can't beat a bit of glitter for Christmas can you. That flood water looks scary doesn't it. As I type this it's pooring it down here, hopefully it will stop soon! Take care and have a happy week, Sue xx

So sorry about Brian's ongoing issues, apart from being unwell it looks as if the whole flipping susytem is now backing off over home care.

A few Playground ducks, couple of geese AND some penguins that mysteriously appeared over Christmas/New Year will be on the bus to join your waterfowl park tomorrow! They all have clean handkies and their bus fares - AND directions to your house.

Wow to all the flooding and I sincerely hope things have receded a little x. Still wild and stormy up our way but no floods where I live x. So Sorry to hear about your friend and the lack of care package x.
A great card and and I love it as an easel card too x. 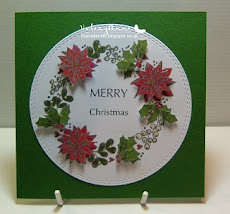