Both of my Grandson's have their Birthdays in December just 1yr apart.  My daughter's son is very much into cats so his card this year reflects that. He did put feelers out  for cat as his present but I don't think his Mum was too keen on the idea of going out and rounding up yet another stray to add to the household!  The digi image is a pre coloured one by Paper Creator Called 'Bandits Mischievous Smile' (I did have a blue and white  persian cat at one time that I named Bandit). The background paper is called 'Folk Art Cats' by Cooper Station.  The Meows  were black stickers from my stash. The number nine cut from an old calendar at some time and kept in an old tin just in case. 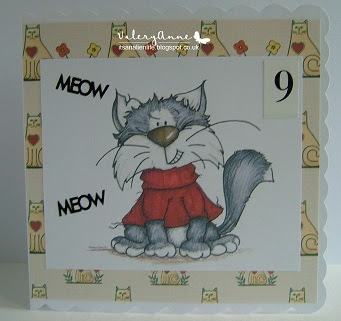 My other Grandson  is very much into football. The image is a digi From Twinkle Lane Designs. You get the footballer, sentiment and the goal tag all in the download. The image has a number 1 on the shirt so I fussy cut a new shirt from plain paper which I coloured in with the 2018 strip of his home team. The number is black stickers I had in my stash and of course represents his age.  The blue netting paper is by Betsy Rainbow and the black football paper from the Print Fun Factory both Etsy shop downloads. Oh and he does have red hair though my son would shoot me for saying so!! 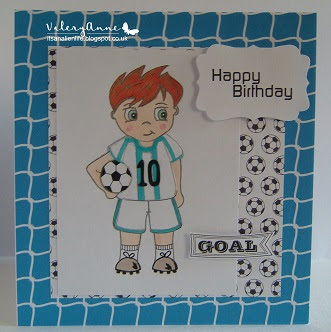 Two fantastic birthday cards Valery, hope the 9 year old wasen't too upset at not getting a cat for his birthday.

Brilliant cards! So perfect for their interests as well. Hope you're OK and haven't had a relapse, it's very quiet over your way right now!

Lovely cards - I'm sure the boys will love them too.
Kath x

You have personalized so well these cards for your grandsons!! Great work on both! The one for your nineteen makes me smile, it's very fun with those stickers! :D

Fabulous cards, Valery. I love cats! And the boy is sooo cute! Kisses, my friend.

Two fabulous card, Mrs A, perfect designs for your grandsons. I'm sure they were delighted to receive such personlised cards. xx

Fabulous cards Mrs A and thanks for sharing with us at Paper Creator! huggles Sue xx

I bet the grandsons loved these cards. Very clever with the soccer shirt.

You did a wonderful job with these cute cards and the one with the cat really tickled my fancy. What a rascal that kitty is! Great use of stickers to personalize the footballer's jersey too!

Hi Valery 2 great cards...I hope your grandson gets his cat one day..bless. its lovely how personal you have made their cards and I bet they were thrilled with them. I'm also here with my Country View Challenges DT hat on to say thanks so much for joining in with our anything goes challenge. Hugs xx

What a cute card for your grandsons,Valery.love the cute cat.Enjoy your weekend.

What fantastic cards for your grandsons, they will love your personalized cards.

Hi Valery, two fabulous cards for your Grandsons, I adore the cat, he looks like one of Top Cat's buddies, what a brilliant expression on his face. Super footballer card too, Kate x

Fantastic cards for your Grandsons and great male inspiration ideas. I especially love the first one - the image is adorable and the paper you used is perfect.
Anne x

Lovely football card and what a coincidence that the boys are both 10 this year. I would have liked to have coloured the strip like you have done to make it more personal, but mine was a precoloured image.
Kath x

Great card ! Fab cat ! Thank you so much for joining us on the January "anything goes" theme at Country View Challenges !
Corrie x

Both cards are fabulous Mrs A, love the cat and the boy, wonderful designs!
Hugs, Sherry x
Loose Stitches and Unraveled Threads

Both are lovely cards, Mrs A. I must admit to loving the cat with the silly smile :) Thank you for sharing your project with us at the Crafts Galore Encore January Challenge, “Anything Goes”. Good Luck and hope to see you again next month!
Carole x DT

Both your cards are adorable! Wonderful designs! Thank you for playing with us at Through The Craftroom Door ATG Challenge and looking forward to seeing you again next time! Good luck!
Regards,
Sunila and Aditi- DT
www.dotstolinesblog.wordpress.com

Super cute!!! Thank you for joining us at Love to Scrap, good luck!!! Amy DT

Sooo cute!
Thanks for joining us at CraftyHazelnut's Patterned Paper Challenge for January!
Monica - DT

Fabulous cards Mrs A! I love the smile on that cat, so cute! Thank you for sharing with us over at Love To Craft! Hope to see you again!
Sherry x - DT for Love To Craft