I received a request for a commission  back in February to make a special card for my  Hairdresser's brother who will be 50yrs old this weekend.
I  was given a list of requirements amongst which were:
supports Liverpool and his favourite team number is 7 which is also his birthdate so could it be on the card . I knew I had a tutorial saved for making little shirts as embellishments  and that I had a strip of ribbon with footballers on it in my stash so an idea for the card was born.
I made a demo card up with my idea and it got the thumbs up so I finished the real Mccoy in good time. The envelope to put it in took way longer than I had anticipated and ended up being an evening and practically an all nighter (the day before I was due to hand the card over) to come up with a design I was happy with which had included  the bright idea of incorporating  a magnetic closure  on the flap and morphing  the envelope into a slim box  shape!! 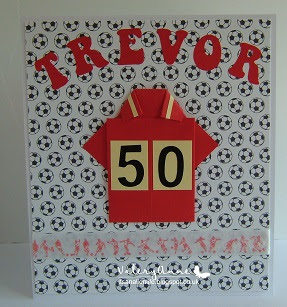 The little shirt is a tutorial which can be found here.  I checked what the Liverpool strip for 2016/2017 is and made it using the same colours. The ribbon was just long enough to wrap around the design paper which is a digi by Print Fun Factory 'Balls No 4'. 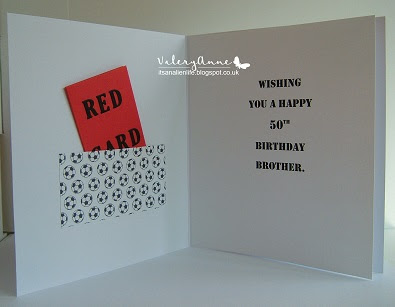 I made a small pocket for inside the card and added a Red Card. 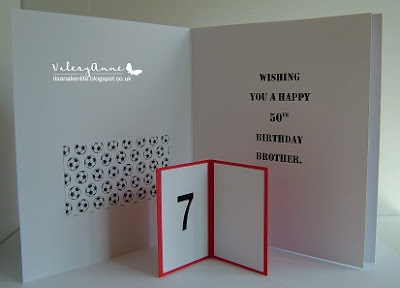 This is where I incorporated the No 7. 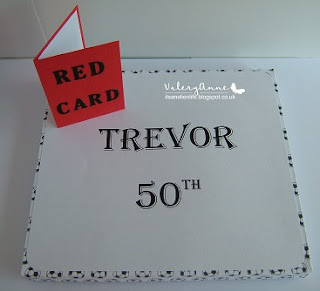 I have now received a commission for an 80th Birthday card and the recipient used to be a carpenter!! Not needed till next year though but I have ideas already and just ordered some more magnetic closures.

Hi Mrs A this is a stunning card. Your hairdresser must have been thrilled with this card for her brother. Have a great weekend. Take care. Hugs Jackie

Love this card, nice to make for others who appreciate.xx ♥[aNNie]

Great ideas for the goal! :D The Red Card with the number 7 inside makes me giggle and surely will be a surprise for the recipient! Fab little shirt, just perfect with the colours and the 50, and the background is perfect too!! You have made a stunning work for your Hairdresser's brother!!

Oh this is awesome! The shirt is brilliant and I absolutely love the red card inside!! What a good idea!!
Lucy x

What a great design is this. I love it!!
Lia xx

This is a wonderful personal card for him. If you keep this up you will have more work than you can handle. We will be glad to say "we knew you when"! I love that little shirt and it can be used for so many things. Great job, Valery.

What a fantastic card, love the red card! Cara x

Brilliant card, love the idea of the red card.

What a great job you made of this, so much better than shop bought ones.

A brilliant card and design. The football shirt is fabulous. Friends love to ask for detailed, personalised cards but they can be tricky to design. You've done a wonderful job here xx

What a fab card Mrs A and I love that shirt! huggles Sue x

Hi Mrs A,
what a very brilliant card and box.
Love your wonderful design, and what a very fab idea the red card in the pocket is.
Lots of crafty love. Jenny L.

Brilliant - and so clever how you incorporated the number 7! I never would have thought of that idea - love the little shirt. Made those myself in the past and great fun fiddling on :)

WOW what a perfect card...your client must be thrilled...you have made it both elegant and thematic
Cheers
Dr Sonia

This is such a perfect card for her brother. The design papers look great and I love your design here. The inside pocket red card and number 7 are a wonderful addition.

What a wonderfully special card, Mrs. A--you nailed it! By the way, your comment about the thunder & hail on your wedding day gave me a good chuckle!

I always love a personalized card - this one is fabulous! Thanks so much for joining us this time at the Craftyhazelnut's Patterned paper challenge, Elizabeth (DT)

Such a fun little card! So creative and well thought out. Thanks for sharing with us at CRAFT Challenge this week!

Super cute!!! Thank you for joining us at MTTC, good luck!!! Amy DT

This is an awesome male card. You put so much thought into it. I really love the folded shirt and the inside. Thank-you for joining us at the Crafts Galore Encore Challenge 'Anything Goes' May 2017.
Nicola, CGE DT (Amethyst Lily Designs )

Hi and welcome to are Challenge this month.Thank you for sharing your project with us good luck with your entry hope to see you again soon hugs Sue DT xx
https://www.facebook.com/groups/376140345820051/
http://scrappers-delights-challenge-blog.blogspot.co.uk/

Fantastic CAS birthday card! All the details looks fabulous. Thanks for joining us at Love to Craft! Challenge Blog
Tina dt