Not One but Two.

Just felt like making a card to take my mind off things and before I knew it there were two on my desk! Made these for Di's
Snippet challenge #9.
I saw this butterfly idea in a magazine with several butter flies on the card using the Martha Stewart Punch all over the page die, but as I don't have it I had to make do with just the one large one instead. I used snippets for the double sided butterfly and the flourish which is attached to the top of the card. (Realised after I had done it that I could have just die cut the flourish from the card as well as the butterfly.) Not very clear from the picture but I used up some brown seed beads for the body. Had these rub on transfers by Pergamano in my stash and really pleased with the results. Big difference from the letter and number transfers we had as kids Yes ! Before you
ask the all inmportant question I do still have them. Says WH Smith on the packet and even tells me they are in Hevetica 24pt. No point scoring for the wally shrink plastic heart button. Couldn't go anywhere else really. 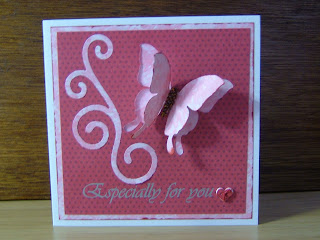 Entering into the following challenges:
Flutter By Wednesday: Open showing butterfly, Angel or Fairy.
Divas By Design: Spots and/or stripes.
Do you Stack Up: Things with wings.
All Sorts: Spread your wings.
The Crazy challenge: Anything goes.
My second card is using up snippets from already used snippets! Namely the green stem and leaves from the paper used on the grass in the bunny card I made previously. Again the flower is my version of an idea seen in a magazine on a step card. The ribbon is a 12" piece that I have had in my stash for decades (3 at least). Debated long and hard where to hide the wally plastic shrink heart button but in the end opted for the obvious. 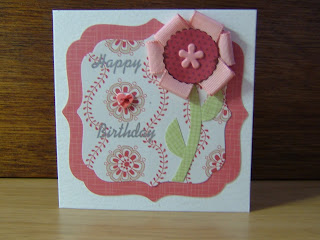 Entering into the following challenges.
The Poodles Parlour: Birthdays.
Paper Play challenge: something old (ribbon) something new (Nestie dies Christmas money).
Aud Sentiments: Happy birthday.
Crafty Catz: Punches or Dies.
Creative Inspirations: Anything goes.
Best of all I have only used stuff from my stash/freebies so I havn't broken my UIU pledge for 2012.
Posted by Mrs A. at 14:04

Wow Mrs. A!! These are both beautiful indeed - love the raspberry coloured paper. They're really super cards, I need that butterfly die really badly now!!

This is being typed whilst hiding under my desk with the curtains drawn in case you come to see what's cooking......err, unless you arrive with that bottle of wine nicely chilled of course! :)

Enjoy the rest of your weekend!

The flower look so cute and elegant and the dimensional butterfly is awesome!

The flower look so cute and elegant and the dimensional butterfly is awesome!

These are such fun and cheery cards. Your attention to detail is what really makes them sing. I don't know why I don't make cards more often. Joyful creating...

Two super cards Mrs A. Love the colours on both of them. Debbiexx

fab cards, great design
thanks for playing with us at paperplay this week
hus
céline

I love those cards, especially the butterfly one. I don't have the die, so I am now working out how I can use the Silhouette to create a similar effect - it must be possible. There is more than one way to skin a cat, as they say. See you in the playground tomorrow. xx Maggie

Glad you made it into the playground with these great cards, the rub on letters from WHS takes me back!
Linbyx

Two lovely cards Mrs A. glad you made it on time. Think I've got some of those letter and number transfers tucked away somewhere too!! Carol x

Hi Mrs A, Both card are fabulous love the colour too!:)

Two super cards, love how you have created the butterfly.

Thanks so much for joining in my Things with Wings theme at Allsorts this week, good luck and hope to see you again.

Such beautiful cards, I found a set of rub ons from whsmith the other day that I bought when I first started crafting as I thought they would be so useful and they are still sealed in the packet lol

Hi Mrs A! Hope you're feeling perkier today. Thought I should let you know that your spill in the duckpond is causing much hilarity over in the playground - I woke up this morning still laughing about it :) Sarn is going to buy a life buoy! Di xx

Oh Lord, and I thought it was just those monkeys of yours that always got up to no good. The blind leading the blind possibly??? You did bring back memories for me though as I have little balance and even less coordination and, well, let's just say that me and pogo sticks just didn't get on, no matter how hard I tried!! Love the cards, especially the butterfly one.

This is so elegant. Thanks for joining us at Do You Stack Up.

They are both super effects

Love the butterfly, so pretty and delicate. Perfectly gorgeous. Not so sure it will go with duck pond green though, so take care around pogo sticks!

OMG! I would love to receive this birthday card - it is so-o-o pretty! Both cards are equally gorgeous. Thanks for sharing your creativity with us for our "Happy Birthday" challenge at Aud Sentiments!!!

Just wanted to say thanks for the kind words you left for me at my blog :) And that butterfly card is just amazing!

Fabulous creation! Thanks for joining us at Creative Inspiration Challenge.

OMG these are both lovely! Love teh butterfly on the first and I LOVE the way you've used the ribbon for the flowers, something I'll have to give a try.
Blessings Bernie

Your cards are lovely! The colors make me think of Spring - which I am so ready for! Wishing you a happy day!

They are both wonderful - love the butterfly on the first one and the flower on the second is just beautiful.

Thanks for joining in with us at Divas by Design this week.

Very pretty cards! The butterfly is amazing! Thanks for joining us at DYSU.

Both cards are so pretty!!!Thanks for sharing with us at Aud Sentiments.
audrey
dt member

These are both wonderful, and that flower is BRILLIANT!

Beautiful cards. Thanks for joining us at Aud Sentiments.

Oh my word,this is such and adorable creation , lovely image and beautiful design Its just perfect for our Dies & Punches challenge

thanks for playing at Allsorts this week

Great cards, particularly like the butterfly.
The "jigsaw" edge threw me, as I think it is supposed to be a postage stamp card! but can see now why you saw it as a jigsaw edge. Anyway, it is a card blank cut like that - mine were from Cardcraft.
What have you got in your lunch box anyway??
Linbyx

You should make cards more often, these are both FAB, I love the flower on the 2nd one :)